I also posted a project update, which all project backers get in their email, and anyone can read on the Bodacious Creed Kickstarter page.
Here’s the text of that update:
Howdy, my fellow travelers on this exciting journey into the world of Bodacious Creed!
“Bodacious Creed: A Steampunk Zombie Western” is currently featured on Leonardoverse, a popular and excellent steampunk blog by author Leonardo Ramirez.  Have a look, and also browse his blog!  Leonardo wrote a wonderful entry about my project, and I’m proud to have it featured there.
It has also been featured on many Facebook pages.  Have a look at the Bodacious Creed Facebook page for more information.
I’ve also been contacting newspapers and periodicals.  Yesterday, I sent press releases to a few Orange County papers, and one to Watsonville’s Register Pajaronian.  I grew up on Watsonville, California, and, way back when, took Creative Writing at Watsonville High.  I hope they all pick up the story.
This message is getting a little long, so I’ll end with this.  Thank you, all of my bakers, and everyone who has shared this project!  Thanks to you, we’re at 21% funded already!  Please help keep the momentum going by sharing this on Facebook, and Twitter, and letting anyone who might be into a steampunk zombie western know that this exists.  Your support means the world to me!
Feel free to check the Kickstarter page often for updates.  Of course, if you pledge, even as little as $1, you will also get the updates in your email.
I’m also excited to report that the project has been live for not quite 3 days, is 21% funded, and has 14 backers. The video has been seen 112 times, and the most popular reward is the $10 level, from which backers get a digital copy of the book when it’s published, a high resolution jpeg of the cover, and a pdf copy of my first novel, Children of Rhatlan, whether the project gets funded or not.  I’ve made sure that all the rewards are worthwhile, so have a look.

Views for this blog have jumped up over the last few days, and I guess I shouldn’t be surprised!

For those who don’t know, and stumble upon this blog for whatever reason, I have launched a Kickstarter project for Bodacious Creed.  Back when I was creating the concept for my demo reel, in my Pre-Production class at Academy of Art University, I naturally thought that stories about Creed would be, well, bodacious.  I’m also a writer, after all, and the characters really got into my head.

Here I am, a year and a half after finishing my thesis and earning my MFA in Animation and Visual Effects, and Creed is still with me.  In part, that’s due to the fact that I polished up the demo reel a few times.  Even if I hadn’t done that, though, Creed and Boyd are two characters who won’t let go of my imagination.

The Kickstarter project is called Bodacious Creed: A Steampunk Zombie Western. And yes, that link’s clickable!  Please head over and check it out. The video is short and to the point, and the rewards for backers are pretty great, even at the $1 level.  I want everyone who pledges to feel connected to the project and to get something cool.

I was going to link the latest version of my demo reel here, which also features a train, but you can watch it if you scroll down on the Kickstarter page.

Oh, and here’s an image that features prominently in the video.

So, please visit the project.  Become a backer if you want, or share it on social media, or just have fun checking it out.  It’s been online for just over 24 hours, and is already 10% funded!  It’s good to see that people are excited about this project as I am. 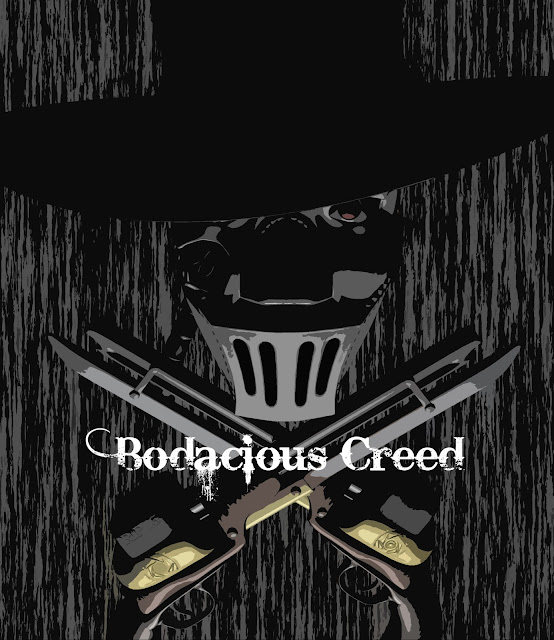