This is an interesting time for me.  It’s rather amazing that I have only four weeks left of my Academy of Art University education!  So, I’m busy rendering Bodacious Creed, which is coming along well.  I’m rendering out the second of three scenes.

It was going so slowly at first.  I realized that to get it done in time, I needed to get a laptop.  With my desktop being about three years old, the laptop is rendering faster.  It’s great to have two computers rendering this out at once and has already saved me a lot of time.  Now, I feel like I can go back to Scene 1 later and render out another turntable or two, to add to the reel.

I’ve been applying for a lot of freelance jobs.  I won the bid for a small job, and have been working on that.  Hopefully, that will lead to more work.  I’ve also gotten encouraging replies on jobs that I haven’t received.  I have ideas for two classes I would like to teach at the community center, too.  Once this reel is finished, I’ll be able to start applying to studios.

For my thesis, I also wrote the final review of my thesis work, and sent that off for professional printing, and have done prints of some of my work.  I will send all this to the academy later in the week for their archives, along with what I have finished of the demo reel.  Once the final reel is done, I will submit it online for my final review on December 8.

So, that’s about it for now.  I will probably not do another vlog until my demo reel is finished.

I hope everyone had a blast for Halloween!  Ours was certainly fun.

Anyway, on to Bodacious Creed.  I’m happy to say that I am in the polishing-up phase.  Here’s an image I rendered last night.  The background is from my midpoint presentation, and I will probably use it in the demo reel. 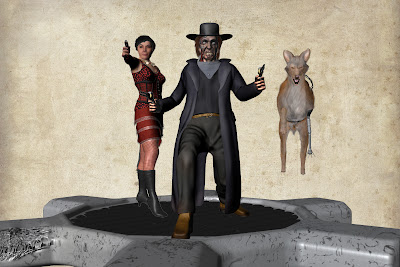 This preview of Scene 3 shows how far the project has come.  It also shows that I have lots of examining and tweaking to do!  For instance, in this image alone, Anna’s eyes are inexplicably black (I haven’t tracked down why yet), and her clothes need wrinkling.  Creed’s duster is poking into his shirt, and he doesn’t have any eyebrows.

Today, I’ve fixed the duster problem, and went around the model in this scene, making sure there was no unwanted overlap.  I also worked quite a bit on his right cheek area, making the hole look more believable, adding a more wounded, rotted look to his gums, and made sure his jaw and teeth looked right together.

Aside from needing to do the wrinkles in Anna’s clothes, the major modeling is done.  I may add some variety and interest to the base. I’d actually like to have three similar bases, with some interesting variation, and to add a few more props.

Since my final review is on December 8, I should have time to do all that, unless I get stuck on something.

Yep, December 8!  If you’ve been reading this blog since the beginning, you’ve seen this go from, “I have a modeling thesis to do, and I need to come up with ideas,” to the idea for a Steampunk/Western project, to adding the Horror element and refining it, to pre-production, including my working with concept artist Josh Stewart, to the production phase of modeling and texturing, to well, now, almost done!

And, as always, more soon!