You read it!  I got straight As last semester.  I’m very happy, and looking forward to next semester and working hard on Bodacious Creed!

I said recently that I’m not sure if I’ll be working on my thesis over the break.  Really the main reason for that is that I like getting input from my instructors every week.  But let’s face it, I love this thesis, I want to make it as awesome as I can, and I’m not going to be able to stay away from working on it.

Plus, class doesn’t start again until January 31.  That feels like a long time to set Bodacious Creed aside.

So, I’ll continue my progress, and probably do some vlogs as well.  A few things I’d like to accomplish with it over the break are:

1. Making a few minor, but important, changes to the Anna Lynn Boyd model.
2. Texturing Anna with Spotlight in zBrush.
3. Bringing the detail of the Bodacious Creed model up to the next level, so that he’s totally ready for zombification in the Spring.
4. Creating a few of the hard surface models that I’ll need, such as a gun or two for Creed.

Check out the Couch Zombies blog for more!

And, if you want to get caught up on Bodacious Creed, there’s plenty to enjoy in this blog and on the YouTube channel!

It’s hard to believe I’ve been working on my thesis, Bodacious Creed, for nearly a year!  I started in the Spring 2010 semester, developing the idea in Pre-production class.  Over the summer, I worked with illustrator Joshua J. Stewart to get concept art done for the project, and I presented my Midpoint Review.  I was asked to make a few changes, did so (with a few more great illustrations from Josh), passed my review, then worked hard on the models all this semester, Fall 2010.

The semester ends this week.  I will probably do some more work on my thesis over the break, yes.  But I will also be working on Couch Zombies.  We’ve got a great animation coming along soon.

Here’s the latest Bodacious Creed vlog, showing my work for this semester.

Thanks for following me this far! One year down, one more to go!

And if you haven’t done so, I hope you’ll subscribe to this blog, the YouTube channel, and the Couch Zombies show!

Also, I know this economy is crap, for the great majority of us.  But if you’ve gotten anything out of this blog or the vlog, and you can afford it, please send a couple bucks my way via the tip jar link to the right.  I won’t think any less of you if you don’t, but I’ll sure think the world of you if you do.

Today, I read the current notes for my Bodacious Creed head playblast from my Head Sculpture & Facial Expressions instructor, Cynthia Rangel.  (Very good instructor, by the way.)  She suggested a few changes, and they were pretty easy to do.  One reason they were so easy was that she taught us about the Graph Editor in Maya, which shows a graph of the changes in an animation, and makes it very easy to change the extremity of a pose, such as an open mouth, and to move keyframes around to fix timing.

So, I got those fixed, and today I’ll be rendering the animation.  Each frame takes a good two or three minutes, so this is going to take all day, at least!  Anyway, I’ll share it in the vlog when it’s done.  As I type this, I’m doing a test render to make sure the frames are going to look as I want them to.  It’s looking pretty good!

Unrelated to the thesis, I’ve also made progress on the Zombie Janet animation for Couch Zombies. As today, I’ll be rendering the Creed animation, I probably won’t have time to work on Z Jan’s, but so far, I’ve animated her head tilts, eyes, eyebrows, and eye lids, and am about half way through the jaw.  I’m even opening her mouth slightly when I hear a breath for more realism.

Janet had some comments on the shape of the head the other day, and I didn’t think I could accommodate the fixes, as far as I was into the animation.  But, I figured out what to do!  I just had to create a new blend shape with more exaggerated zombie features.  I then deleted all the blend shape connections from the head, reapplies them all with the new one, reconnected them to the animation control, and was able to morph her head to the new look while still having all the facial controls.  Sounds like a lot of work, and it was, but not nearly as much as if I had to redo all the blend shapes.

Okay, back to rendering this animation.  The still frame looks good!

With the semester coming to a close (just one week left!), I’m getting certain things wrapped up. Those are:

1. Finishing up the Bodacious Creed head animation for Head Sculpture and Facial Expressions.  Basically, I need to make final tweaks to the animation, then do the final render.  I know, I didn’t post much of it in the vlog, but I’m waiting to have it finished to post more.  I think it’s looking pretty good.

2. Detailing Anna Lynn Boyd pre-texturing.  I got her up to what I think is the right, higher level of detail.  This, I should actually show in a vlog, come to think of it!

3. Detailing Bodacious Creed pre-zombification.  Like how I coined that term?  Or did I?  It seems to me that someone else must have used it before.  Anyway, I’m detailing in more of his muscles and bony landmarks, too.  The texture on him is looking very good, though I should probably still polish it up at the fingers and toes.  I’ll be working on this the next couple of days, and I think I’ll just show the further sculpted models in a vlog together.

Next semester, I’ll continue with these characters.  Anna Lynn will get her texture, and Creed will get zombified and get all that great Steampunk technology built in.  I may also at least create the base mesh for Coconino, Creed’s Steampunk/cybernetic coyote.

Also next semester, I’ll be taking Introduction to Rigging.  As a 3D modeler, it’s good to understand the processes later in the pipeline.  That way, I’ll know better what the riggers need to get out of the models, and I’ll therefore be a better modeler.

Plus, rigging, while quite technical, is fun, and a will be a nice skill to have.  With the rigging I’ve learned in Head Sculpture this semester, I’ve already rigged a 3D head for our YouTube show, Couch Zombies.  While eventually, we hope to have the show itself animated in Flash, I’d like to create some 20 second to 1 minute spots using 3D animation.  Hopefully they will be a draw in themselves and get more viewers to the show, and will be a nice change of pace for me, and the cast, to work on during the winter break.

The vlog I promised yesterday is up! It shows details on the body texture, and one technique for fixing texture problems, and the beginnings of the head animation.

I finished animating the jaw and lips as well, and they look pretty damn good. I’ll be sharing that later.

My last entry to the Bodacious Creed blog was five days ago, but it feels like I haven’t written anything for weeks!  I’ve been working hard on the thesis all these days.  I’ve done and learned a lot, just since last Sunday.  So, here’s a breakdown of what I’ve been doing and how it’s all going.

A. I had my weekly online meeting with my Group Study instructor, Chad Josewski, on Monday.  I always learn a lot from those meetings, because I’ll come in with specific questions and Chad will answer them all.  He also points out where he sees my models need improvement.  Here’s some of what resulted from that meeting.

B. I had an upsetting problem with the head model.  Not the hair… that was easy to fix once pointed out.  It was with the blend shapes.

Remember, I talked about those before?  The blend shapes are all the morphs that allow for the face to be animated.  Eyebrow raises, smiles, things like that.  I had animated the head tilts, the eyes, the eye brows, the eye lids, and the jaw.  When I went to animate the mouth shapes (the phonemes, for when he’s talking), some weird things started happening.  The shape of the mouth would be different depending on where I was in the animation.  Sometimes it would do the opposite of what it was supposed to, say closing instead of opening, or totally distorting the face.

I ended up resetting the animation to see what was going on, and after much trial and error, figured out that the blend shapes were interfering with each other.  I would raise eyebrows, then go to widen the mouth, and the eyebrows would lower.  I was afraid I would have to go back about five weeks worth of work, and redo all the blend shapes.  I was afraid that the problem lay with zBrush.  (And believe me, I’m glad that wasn’t the problem, since zBrush makes creating them so much easier, and better looking!)

I posted to two school forums: the one for my Head Sculpture class, and the 3D Modeling workshop, and asked if anyone could figure out what was going on.  I also posted the file itself so people could check it out.

And now, they’re working fine, and not interfering with each other.  Phew!

Since I had to redo the animation anyway, I re-videoed myself acting out the line, and have started the animation again.  Since I now know what I’m doing with the animation, it’s coming along rather quickly.  I’m already up to animating the eye lids.

Oh, the line?  It’s from American Beauty, and is Kevin Spacey saying, “It’s the weirdest thing.  I feel like I’ve been in a coma for about twenty years, and I’m just now waking up.”  I had asked if we could record an original line, but we’re supposed to choose one that comes with the class.  That’s Okay, this one works pretty well.

Time permitting, I’ll do a vlog later today and actually show a little bit of this work. 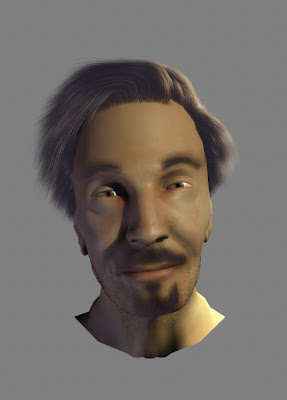 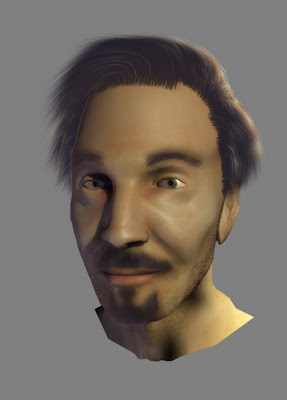