Lots of weirdness with Maya today, and straightening out the model of Bodacious Creed!

I’m working on the UV mapping today as well, and have had some strange problems with that. I think I finally figured out how to do it just right. More on that in another post.

For now, here’s the latest video!

It’s not quite a week since I posted the first Bodacious Creed production vlog, and here’s the second.

Since last week, I’ve made changes as well as progress to the models.  Watch the vlog for more!

I’ve been making good progress on the models for Bodacious Creed!

I’ll probably do another vlog today or tomorrow, time permitting, to show the changes I’ve made.  These include:

2. Getting Creed’s head on his body for Organic Modeling 2.

4. Adding in Anna Lynn’s mouth cavity and eyelids.  This is actually from instructions for Head Sculpture, but I’m using the instructions on Anna Lynn first, for Group Study, and will do them on Creed next week.

That’s pretty much it, so it won’t be a very long blog, but the improvements look really good and I’m ready to share them.

You know you’re making progress on something when you have a milestone like that!

I just posted a new vlog with lots of video showing the progress on my models so far.  They are in the base mesh stage.  This stage is very important in getting the topology correct, so that detailed modeling goes smoothly.

In case you don’t want to click over to YouTube, here’s the text that accompanies the video there:

This video shows the start of the production phase on my thesis, Bodacious Creed. The modeling has begun!

If you want to know more about my 3D Modeling thesis, visit the Bodacious Creed blog: http://jf-mastersthesis.blogspot.com/

I mentioned “Couch Zombies” in the video. That’s a great new Web series I’m working on with other film, animation, and artistically inclined friends. Subscribe to it here on YouTube, at http://youtube.com/couchzombies.

Sorry that the portions where I show the modeling work are glitchy! I’ll need to figure out if there’s a way to make the videos look better in the future. But if not, I’ll still keep sharing my progress anyway!

I’ve been putting a lot of hours into modeling the  base mesh for Anna Lynn Boyd this week.

Anna’s a fascinating character: a woman in her mid 20s, she’s a brothel madam, and an inventor/engineer.  She’s quite successful for her age; her intelligence and business sense have gotten her far.

This is a woman who will raise the dead if she thinks it will do some good.

If you’ve  been reading the blog up to here, you know that I thought I had picked out the right model, twice, before settling on one who really looks the part.

Here are a couple of jpegs comparing Josh’s concept work to the model I chose for Anna. 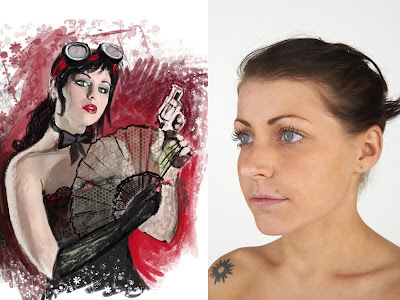 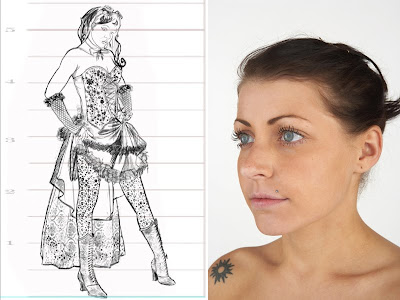 Here’s the base mesh I created of her.  It’s just about ready to go into sculpting and detailing mode in zBrush! 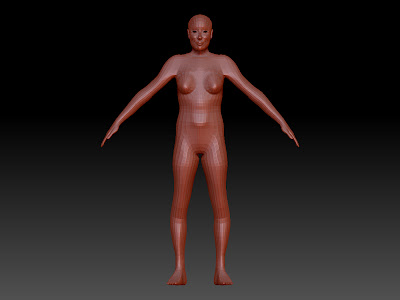 To better understand my own character, I bought a very good book on prostitution in the Old West.

I’m almost done with the base mesh for Anna Lynn Boyd!

Now, that might not mean much to a lot of readers, though others probably know exactly what I’m talking about.  So, I’ll break it down.

When modeling just about anything with polygons, you want to first create a model with few polygons.  However, you want it to be shaped as close to the person, creature, or object you’re modeling as possible.  Imagine drawing a grid all over your body that defines the shape of you.

That’s basically what I’m doing, only in the computer, and of Anna Lynn.

Anyway, it’s shaping up very nicely.  I’m working on the face now.  I’m actually using a mix of instructions and blending them together.  The first is from when I took Organic Modeling, and learned from Tareq Mirza how to create a male base mesh.

However, that mesh was primarily for anatomical study.  The layout of the body is very good for other applications, but I’ve tried sculpting different looks from the head of that model, and it doesn’t deform as well as I need.

So, I’m using the instructions from Head Sculpture and Facial Expressions to model the head and face.  This took some serious retopologizing of the model of the head, while not altering the body.  But with that out of the way, the actual modeling of the head is coming along really well.  I’m working on the nose and ears today.

For Bodacious Creed, I’ll do something similar.  One exception is that I should be able to take the head model for him from Head Sculpture, and graft it onto the body I’ll be modeling in Organic Modeling 2.

Sorry if your head is now spinning.

I figured I’d report the progress I’ve been making on the Bodacious Creed models over the last couple of weeks.  I’ve shown some of the photographs I’ll be using to base my 3D models on.  I’ve also started the actual process of modeling the figures.

I’m about half way through with the base mesh of Creed’s head for my Head Sculpture and Facial Expressions class.  I just started creating my base mesh for Anna Lynn Boyd for Group Directed Study.  For that, my instructor gave me a reference 3D mesh to use, as the topology for a female model is a little different than for a male model.  Why not just use that mesh?  Well, I need to learn how to create one myself!  The reference will be a great help in that.  I’m actually using the instructions for building a human base mesh from my Organic Modeling 1 class, and will refer to the female mesh to see what I need to build differently.

For Organic Modeling 2, I will be modeling Bodacious Creed’s entire body.  So far, I’ve just set up the Maya file with the reference images I’ll need.  One thing I’m wondering is if I can, or should, take the head model from Head Sculpture and Facial Expressions and graft it to Creed’s body, or if I should create it from scratch, but use the same methodology as in the head sculpture class.

Hey, isn’t this fun reading all this technical stuff?

The short version is that I’m creating the main character models, and though I have nothing to share with you all yet, the project is moving along well!

Just because I like to mess with ya, here’s another model!

Really, though, I realized that the last model, as gorgeous as she is, didn’t fit the part.  This new model looks more like someone who might be found in 1860s Arizona, with possibly some Spanish thrown in with the rest of her European ancestry. 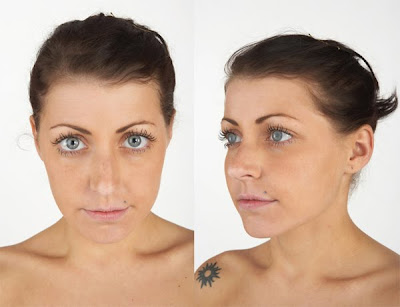 I just put Creed Busts In, the wonderful concept painting that Josh did of Bodacious Creed and Coconino, up for sale as a print on deviantArt!  If you like this picture, please consider buying the print for your wall.  I will be splitting the profit 50/50 with Josh, so you’ll be supporting his continued art work and my thesis.

So, I decided to use the second model, the one I posted yesterday, as the basis for Anna Lynn Boyd.  Beautiful model, you are cast in the role!

It’s going to be a very busy (but very fun) semester!  Here’s what I’ll be doing for each of my classes:

Organic Modeling 2: Modeling as much as I can of Bodacious Creed over the semester.

Group Directed Study: Modeling as much as I can of Anna Lynn Boyd, and doing whatever other thesis planning is required from the class.  For instance, one of my first assignments is to plan the shots for my thesis demo reel.

In addition to the thesis work, I’ve been writing the Bodacious Creed graphic novel.  I’ve written the first draft of the first chapter.

For now, I leave you with an image of the model I chose for Anna Lynn, as well as one of Josh’s concept drawings for her. 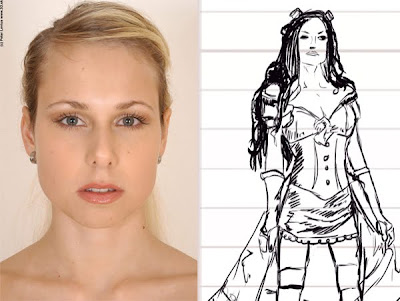