Since Bodacious Creed himself, and the coyote Coconino, need the most adjustment, Josh sent me sketches of them.  Here they are!

I really like the new direction Creed’s going.  He looks both more beautified (handsomified?) and more badass at once.  The idea is that Anna Lynn Boyd, on bringing him back to life, would do so in a caring way and want to make sure he was strong and proud.  She would also want him to look a little scary though, as his “job” is to find a murderer.

I want Coconino to look less damaged than in the new coyote sketch, but I let Josh know.  Basically, Coconino was still alive when Boyd found him, and she patched him up with her best technology.  She would have fixed major damage and done her best to make the coyote able to move as freely as it did before.

More coming as Josh polishes up the characters!  Also, I plan to record a vlog on this, time permitting.  I’ll post the link later. 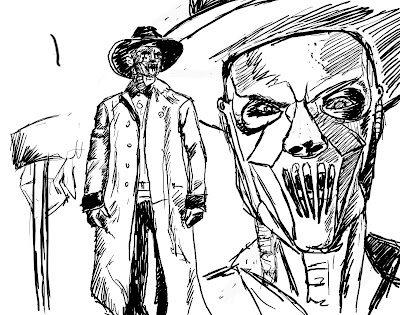 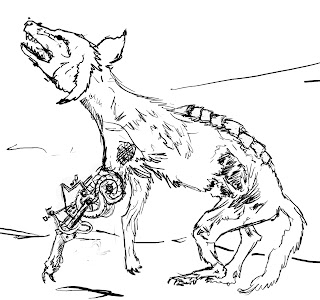 I have a bunch to do today, and tomorrow’s a big family reunion!  But I wanted to let everyone know that I plan to record a short Bodacious Creed vlog today to post later.

In BC news, I’ve emailed Josh the concept changes, and am hoping to hear back soon.  More news as it comes along.

I just emailed Josh the new overall changes that will need to be made to Bodacious Creed.  In short: Push Creed more toward Steampunk.  Give Boyd a simpler yet still Western-sexy dress.  Simply Coconino’s Steampunk parts and make them more organic.

I have no doubt his work will look awesome.

In other news, the animated YouTube program my buddy Steve and I are working on is coming along.  I’ll be doing some character designs soon, probably today.  We also have another good friend of mine on board.  She’s an MFA candidate at AAU as well doing 2D Animation.

More on both later!

This video was so much better originally.  But, I made the mistake of ripping the complete video with no sound, permanently deleting the main video, and then having to recover it.  I was only able to get half of it back.  Since I don’t mind so much looking silly, and I’m not afraid to say that I made a mistake, I went ahead and shared what I have.

It basically covered what is in the last blog entry.

This entry is coming to you from Jonathan Fesmire, MFA Candidate!

I had my Midpoint Review, and the review board accepted Bodacious Creed today!

They did suggest some changes. And, wouldn’t you know it, the requirements and expectations were different than I thought.  I had been going by an older file, on what they expected a couple of years ago.

What they now want is turntables and slow motion fly-bys with the characters posed, capturing moments in time.  Due to the hugely complicated nature of the models I proposed, I’ve been asked to drop the bordello setting, and Scrumptious, the robot.  So, the models will just be Creed, Boyd, Coconino, and a few simple set models to go along with the poses.  Vince likened this to the small sets often used for stage plays.

I’ve been asked to bring Creed more toward the Steampunk side of his nature, for Boyd to have a simpler dress, and for Coconino’s steam-cybernetic parts to work more organically with its body.  Coco should be able to move and act like a normal coyote, and if anything, be enhanced rather than encumbered.

The argument for bringing Creed more toward the Steampunk was compelling: Boyd is a brilliant and sensitive woman, and would put a lot of loving care into him.  Though he had been dead for six months, she would want him to be strong, reinforced, and not so ugly.  Hmm… now I’m thinking that there wouldn’t be a whole lot she could do with his face to make it prettier, so a mask might be in order.  Something to discuss with Vince.

My Midpoint Review is tomorrow!  In less than 24 hours, at that.

For the online reviews, AAU sets up online meeting rooms with Adobe Connect.  I’ll be meeting with an adviser in my meeting room in about 15 minutes for a live overview of what I’ll need to do for my actual presentation tomorrow.

I can’t tell you all how eager I am to start the actual modeling for Bodacious Creed, and to work with professionals in the industry, who will help me with my work.

For the models, I’ll be working primarily in Maya and zBrush.  Here are some books on the subject.

It took awhile to get everything together, but I burned those two proposal CDs  for Bodacious Creed and mailed them off to Academy of Art University today!  They should get there on time… I sure hope so!

So, now I can relax.  A little.  I still have the Midpoint Review on Wednesday!  I’m actually really, really looking forward to it.

So, after a busy week, I finally finished up all the files needed for my Midpoint Review!

1. The Thesis Proposal.  This is very much like the one I posted here, and that you can download.  If you want to get it, I encourage you to look through old posts.  It’s good readin’!

2. The Thesis Presentation.  This is a Power Point presentation that hits the highlights and shows some of my modeling and texture work to date.

3. My Demo Reel.  This is the one that I wrote about in an earlier post today, and that you can watch on YouTube.

And, while not needed, I added:

4. The first Bodacious Creed vlog.  You can see that a few posts back.

Tomorrow morning, I will mail two CDs with these files to the Midpoint Review Coordinator, so that the committee will have them by the time of my review.  But for now, I’m really tired.  I’m going to bed soon.

I may have mentioned that I’ll be presenting for my Midpoint Review on Wednesday.  This is what I have to do to get accepted as a Masters candidate, and to have my thesis project, Bodacious Creed, accepted.  I will then be allowed to move forward on it.

I just finished my demo reel, which will be part of that presentation, and I uploaded it to YouTube.  Enjoy!

I finally finished the first vlog for Bodacious Creed!

I’m also including the video right here for anyone too lazy to head to YouTube. 😉

The song used is the karaoke version of “Better,” one of my favorite tunes by Jonathan Coulton.